To better understand our partner schools that offer affordable education to low-income families and students, Opportunity EduFinance has developed a country-specific framework to define a ‘low-fee non-state school.’ This framework uses the lens of low-income families’ access to schools, and is supported by a range of literature and research methodologies. Applying this methodology to six countries, we found that over 75% of schools in the EduQuality programme charge fees that are affordable to lower-income families.

Why is affordability important to Opportunity EduFinance?

Opportunity EduFinance’s mission is to get more children into better schools. Because we believe families with limited resources should have the same opportunities to provide their children with a quality education, we focus our work on schools that are affordable to lower-income families.

Affordability implies a family can pay for education without needing to forgo spending in other essential areas. – Claire Mcloughlin, University of Birmingham

Given the context of the growing, unmet demand for education and capacity-constrained public management, states are being encouraged to recognize the value that non-governmental actors bring to education (Heyneman, S., Stern, J., Smith, T. 2011). Private schools across the world can play an important role in aiding overburdened state education systems in low- and middle-income countries by fulfilling unmet demand. In the roles of investors and direct providers, private actors can remove supply constraints, particularly for poor and marginalized families.

Most private schools in low- and middle-income countries have adopted a model that is alternatively labeled by academics and practitioners as” “low-fee,” “affordable,” “low-cost,” or “budget” private schools. While specific characteristics and models can vary by country, the common theme that these schools share is that they cater to low-income families. Studies have shown that private schools can fill in gaps in regions where the nearest state schools are too far away or when the demand for education outpaces public infrastructure (Oketch et al., 2010).

How is a low-fee school defined?

FIRST, some academics start by defining what is clearly not a low-fee school.

The space that is occupied between those two extremes can be broken down into broad categories ranging from independent proprietors to chains of providers. Independent providers tend to operate at a smaller scale on a rented property, and if they are more long-established proprietors, they may operate on owned property. Those “organic” schools operating on rented property tend to be the least expensive on average. Many proprietors “start a small school in their home compound (using their own or rented house or apartment […] then seek to scale up as they gain students. Individual proprietors often start this organic school development process from the pre-primary level […] they then add grade levels year by year” (Härmä, 2021, p. 23-4). 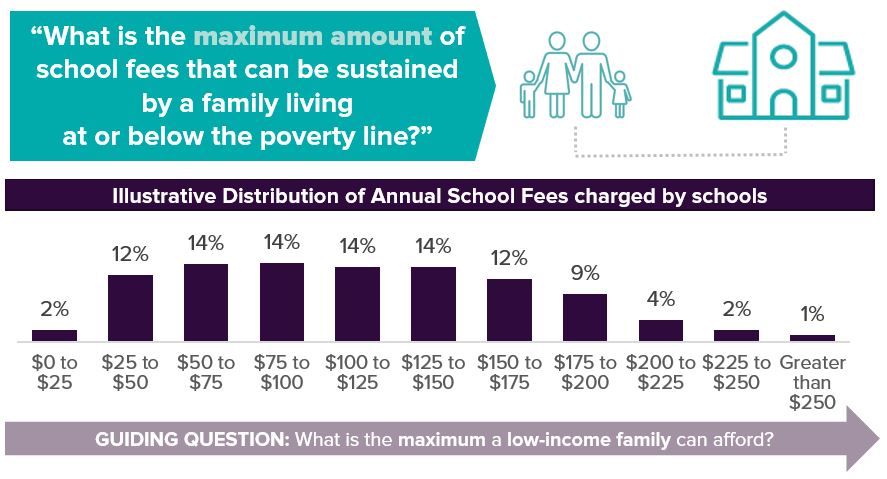 What were the findings of applying various methodologies?

FIRST, a full literature review was conducted to compile the wide range of academic methodologies used to define low-fee schools in different countries.

The literature indicates the poor are likely to look for a school that is more affordable to them (Tooley, 2016), while there is even some flexibility in terms of actual fees paid within a school between students. School fees are generally lowest at pre-primary levels, and they rise incrementally as the child progresses. Schools also can make special offers to parents or parents will employ a “fee-bargaining” strategy to avoid paying full fees when they send multiple children to the school or if the family is in particular need (Härmä, 2009; Srivastava, 2008). Therefore, quoted/ official fees in most markets should be taken as an “upper bound” to the fees actually charged by a school, and there is a logic to approaching the question as “what is the maximum level of school fees affordable to low-income families?”

NEXT, six methodologies proposed by leading academic researchers (including multiple variations) were assessed and applied to different countries to evaluate the range of resulting ‘maximum school fee levels.’ Results of the different methodologies applied to one country with three academic terms per year, are shown below. 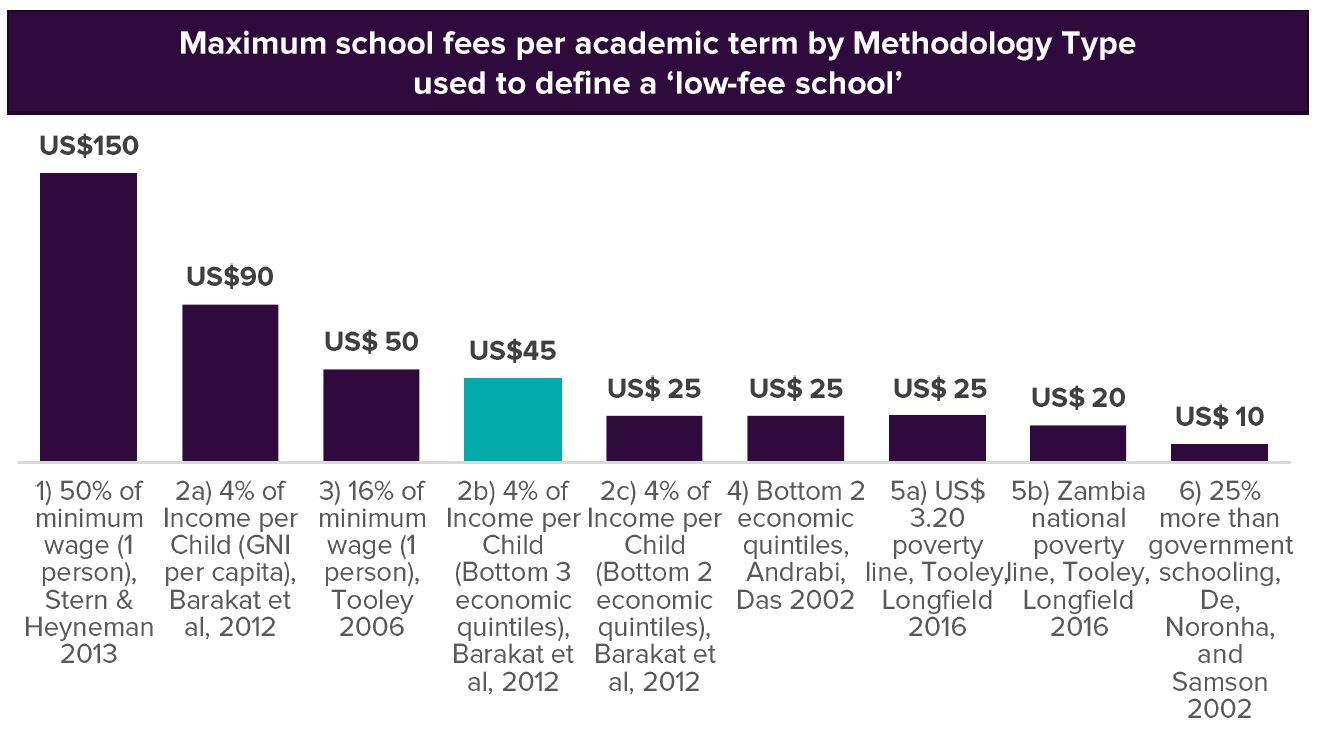 Additionally, each of these versions fails to account for the significant variation in income that exists within a country. Urban incomes and expenditures across sub-Saharan Africa tend to be far greater than rural incomes and expenditures. Further, there are key differences in incomes in urban capitals and other urban environments within countries.

What methodology was selected to define a low-fee school?

FIRST, to select a methodology, EduFinance outlined a list of key criteria to use:

NEXT, the criteria list was used to review the assessed methodologies.

The key determining factor for the maximum threshold of school fees that are considered affordable to a low-income family depends on the income level of the starting point. EduFinance selected the wage levels of the bottom three economic quintiles to establish the income level to use for each country within the methodology, considering the implications of high levels of income inequity. By using this methodology and applying it to each country, EduFinance was able to calculate the maximum threshold of school fees affordable to a low-income family.

Then, using the data collected on fees charged by EduQuality partner schools, we measured the percentage of schools that are offering affordable education to lower-income families. At present, over 75% of EduQuality partner schools charge fees that are affordable to lower-income families. Going forward, EduFinance will continue to utilize this methodology to evaluate new schools joining the EduQuality program in new and existing markets, and measure any changes over time. The below outlines the steps and inputs used to apply the Barakat et al. methodology by country. Download and read the full Key Insight here.

For more information on the methodology as applied by EduFinance, please email edufinance@opportunity.org with an email subject header "School Affordability." 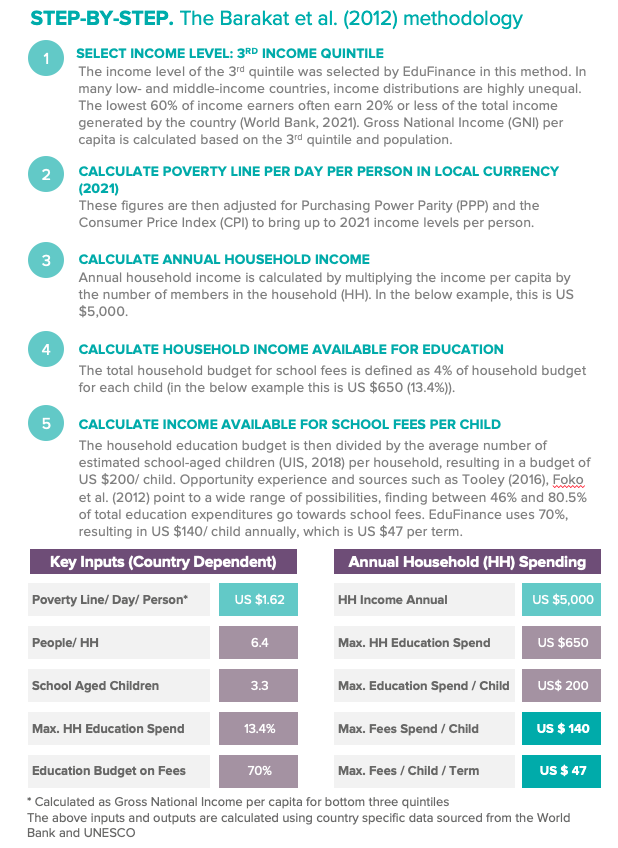 Previous Article
"We have only scratched the surface of potential" - Letshego Ghana & EduFinance
Back to Blog
Next Article
Looking back to Move Forward: Reflecting on our Global Education Summit Side Event